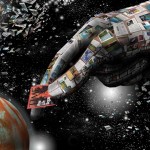 A Difference of Opinion on Cosmology, Death of God, and Nihilism

Thanks, Spanos, for your most revealing response.  It gives a good idea of how you see things and why you think that arguing exotic theories of cosmology and particle physics has some connection to the values by which you live your life.  It seems that behind all the black holes, the Big Bang, quantum foam, and quantum gravity, you expect to find objectively real values.  Is that a correct reading of what you’re saying?

You had also declared that a “scientific-based metaphysics leaves us in a world devoid of values and one in which everything (and anything) is permitted.“

Of course, most contemporary thinkers do not share this conclusion at all!   Plenty of philosophers (e.g., see John Dewey) have affirmed a view of reality which is scientifically based and yet allows for moral values and moral sensibilities which allow civilization to flourish quite well, thank you!  One does not have to be a neo-Darwinist and argue that values can arise from evolutionary processes in order to argue that human-socially based values are sufficient to enable moral life.  The view that a scientific-based metaphysics compels one to admit a mechanistic reality which does not allow any basis for values is an old discredited view that most critical, informed philosophers and writers no longer hold.  But I do admit it is a tactic to which traditional theists and idealists often resort in their attempt to show that moral decency requires a metaphysics that includes a law-giving deity or includes objective values (whatever those might be?).

You had also stated:

“My scientifically-minded colleagues seem to embrace the idea that God is dead while refusing to face up to the idea that everything is permitted. They try to be at least as moralistic as religionists, but this moralism is suspicious in that it lacks a foundation in their perception of reality”

To which I replied:

So, we refuse to face up the reality that everything is permitted?   So, on our materialistic, naturalistic view of the world we have to admit that there are no grounds for rejecting as morally evil the genocides of a Hitler or of a Stalin?  And I thought the old line for Dostoevsky that “if there’s no God everything is permitted”  was just the frustrated utterance of a Dostoevsky who could not relinquish his version of Russian Orthodox dogma.

Your statement also reminds me of the man who complained that  others refused to acknowledge that he could levitate, while giving no evidence whatsoever that he could levitate.  Yes, Spanos, given your view of what follows from the view that there is no God, we refuse to face up to the idea….    But, dear fellow, where have you and anyone made anything close to a compelling case for that implication.

Surely history does not give you any basis for saying that God-deniers are moral nihilists and cannot behave in morally decent ways.  And surely your statement that non-believers are trying “to be as moralistic as religionists” comes across as a joke, since a good case can be made for seeing just the reverse: non-believers often show much higher moral behavior than God-believers.  History is an obvious witness to the low morality, blood thirsty behavior,  and hypocrisy of many of your so-called “religionists.”

By the way, Spanos, your religionists don’t have any objective basis for your values either.  Like all humans, experience and cultural conditioning lead you to designate certain values as high values, whose basis is then assigned to some putative objective basis (a deity or some fantastic metaphysics) which you or your religious teachers have also dreamt up.  This works to an extent; but is not nearly as good as a rational, humanistic basis for moral values, one which harmonizes well with a scientifically-based metaphysics.

You say that European philosophers with their dark views of humanity devoid of a transcendent order to keep them in check display more courage than their contemporaries who don’t emphasize that view of things.  Maybe, who knows?  But a realistic, existentialist view of humanity need not fall into the nervous “fear and trembling” that is displayed by those who need the big “parent in the sky” to guide and reassure them.  Many existentialists who were atheistic did not fall into that kind of cowardly despair.